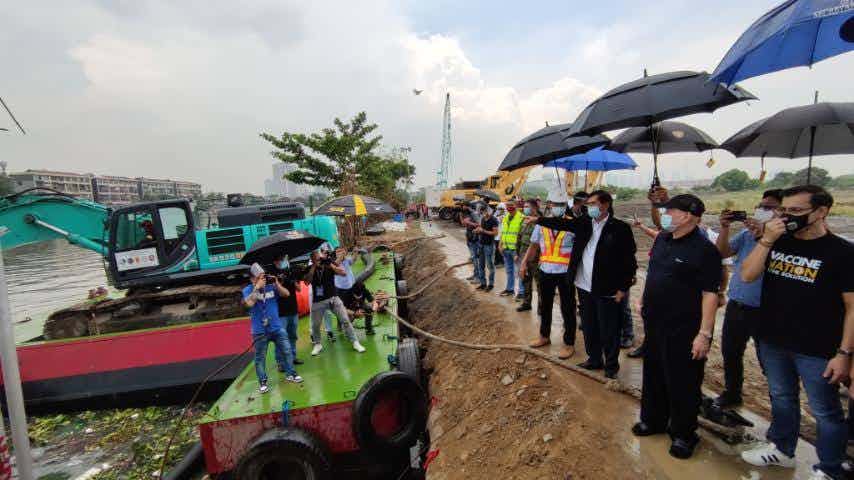 The Pasig River dredging project, which is part of SMC's commitment to the Adopt-a-River Program, aims to improve the river’s water flow and mitigate flooding by deepening and widening the shallow and narrow portions of the waterbody.

DENR said the MOA signing, held at the Petron Sales Training Office in Manila, signifies the start of the project and the commitment of DENR and SMC to work together in the dredging and cleanup of Pasig River. (See also: Time for plastic-less lifestyle; PH dominates top 50 polluting rivers in the world )

"This project does not only directly complement our ongoing rehabilitation of Manila Bay, but one can just imagine the positive impacts the cleanup and rehabilitation of Pasig River could bring to the majority of our population and to the ecosystems that connect to it," DENR Secretary Roy Cimatu said in a press release.

DENR said the dredging project, which is part of SMC's commitment to the Adopt-a-River Program, aims to improve Pasig River's water flow and mitigate flooding by deepening and widening the shallow and narrow portions of the waterbody.

"Indeed, this is another significant step towards our ultimate goal of restoring and enhancing the environmental integrity of Pasig River, one of the most iconic and important waterways in the country," Cimatu said.

In the agreement, DENR will provide the technical expertise for the project while SMC will provide manpower support and dredging equipment.

The implementation of the dredging project will also involve the Department of Public Works and Highways (DPWH), the Metropolitan Manila Development Authority, the Department of the Interior and Local Government, and the Philippine Coast Guard, whose officials have expressed support for the project during the MOA signing.

Meanwhile SMC President Ramon Ang regarded the event as a "very historic gathering" as representatives from various government agencies, along with the local governments of Manila and Mandaluyong, were also in attendance.

After the MOA signing, a site and equipment inspection for the initial operations were also held in the former Pandacan Oil Terminal.

The SMC has identified the narrow and shallow portions of the river along the Pandacan-Paco area, Estrella in Makati City, and near C5 Road, Manila Bay, and EDSA, as priority dredging sites.

The SMC said that larger equipment will be used as the Pasig River is a much bigger river system compared to the Tullahan-Tinajeros River.

Ang said that SMC has invested in a cutter suction dredger—which can dredge 1,000 tons per hour, 10,000 tons per 10 hours a day, or 3 million tons a year—and hopper barge for high volume dredging and transfer of dredged materials to a designated site.

He said they are also looking into conducting percussion drilling for areas that are difficult to dredge due to heavy materials.

Under the MOA, the DENR will also help in the evaluation of soil test results to be conducted by the SMC to identify the location and find the best usage for the dredged materials.

Moreover, it will assist in the application for an environmental compliance certificate or ECC for the relocation site of dredged materials.

"On behalf of the DENR, I would like to extend our sincerest thanks to SMC for its unwavering and continuing commitment to various environmental causes," Cimatu said.